Reasons to Eat There
Delicious Moroccan dishes and mint tea that are certified authentic by Moroccan customers, cozy atmosphere, the chance to buy some argan oil and a great location.

Reasons to Not Eat There
If it’s 3 a.m., you shouldn’t go because it will be closed. Seriously, there’s no reason to not go to this all-around great little place.

Directions & Hours
Caferağa Mah., Şair Latifi Sk. 12 (100m down from the pharmacy on Moda Meydanı). Opens everyday at 4 p.m. or so. Find and like “Marakeş Mum” on Facebook.

It was one of those raw, cold, February days in Istanbul: rainy and windy from a fırtına that soaked us to the bone.

The cold weather necessitated a warm escape. I met up with an old friend I hadn’t seen in years, Naseer, who told me about a Moroccan dining establishment that was more than appropriate for a culinary lunch getaway: Marakeş Mum (as in Turkish for “candle”, not your British mother). Morocco’s nice this time of year, I thought.

So we walked up to a small, non-descript storefront not 100 meters from Moda Meydanı. We peaked into a one room dining area that contained about 5 tables.

“Sorry we’re not open yet, come back in an hour” said the proprietor. Sometimes, you have to call in the food, Naseer, said worriedly.

Beef tangine, the most popular dish

“We’ve got everything, don’t worry. Tangine, couscous, yep…we’ve got it all” reassured the 30-something man with cropped curly hair.

Relieved that we would have the full dining experience, we walked around, had a snack and a chance to catch up at Tuana Börek nearby. Finally, shivering from the wind and driving rain, we sat down inside Marakeş Mum.

The interior is cozy, and cozy is not a euphemism for cramped here. Decorations on the wall — including argan oil and candles for sale, essence oil holders and other rounded Middle Eastern vessels — and gentle, classical Moroccan music make you feel right at home.

Another good sign was the clientele. Two young Moroccan women, 18-year old Turkish language students, were seated at the table next to us. They too were waiting around for over an hour Kadıköy coffee shop for the place to open. They thought the food was authentic and delicious, but said after the meal that the seating, patio wood chairs that seem like they were from Koçtaş, could have been more authentic.

“Look downstairs. We have more traditional seating down there,” Fouad chimed in. Indeed, downstairs was an L-shaped low couch without armrests often found in eastern Turkey. It appeared more conducive to group dinners.

The menu is simple. Beef, chicken, lamb, köfte or fish tangine — an earthenware pot (güveç in Turkish) with slow cooked meat, spices. vegetables and sauce — couscous, and something called pastilla — a flaky savory pastry with meat, fish or chicken. We opted to split the best seller, the beef tangine with prunes, alongside an order of couscous.

First came out three complimentary appetizers: lubiye, a kind of white bean dish, chizo, a spicy carrot salad, and zaalouk, a spicy roasted eggplant, all in three little bowls, with some underwhelming bread rolls. The salads were delicious, balancing each other out.

The main event was even better. The meat was succulent (an adjective that probably tags me as an amateur food writer). The complementing stewed prunes and giant pine nuts were, in a sense, perfect, adding sweet and nuttiness to mildly spicy and meaty beef morsels.

The couscous was more than just tiny bulgur side dish you’d get at the Whole Foods salad bar. It had a full quarter chicken on top, and steamed zucchini and carrot chunks. It was also hearty and delicious on a winter’s day, though not as memorable as the tangine.

What would a visit to a Moroccan restaurant be without mint tea? After dinner, we ordered a compact little tea pot with sugary, minty tea. He started pouring with the mouth of the teapot close to the crystal teacup before raising it a couple feet for a waterfall pour (“for the bubbles!” one of the students, Iman, informed me). Naseer is so infatuated with mint tea that he ordered three pots.

In came a Moroccan couple, and then a Moroccan student who recognized me from the university where I teach.  The student said he came to the restaurant two to four times a week. The fact that we were the only non-Moroccan customers in the heart of Kadıkoy underscored its authenticity.

After the dinner plates were cleared, I had a chance to briefly chat with owner Fouat as he tended to his homesick regulars.

When did you open this place?

I was thinking about a Mororccan restaurant. I couldn’t find one, so I said ‘why not?’ There is a really big Moroccan community, like 600 students. There are a lot of women married with Turkish men. We are making this place like a family place, we are talking with people, chatting with them, making the atmosphere more hot. That’s in Morocco also. If you was there, every time it’s like your home.

Who are your customers?

About 50 percent Moroccans and 50 percent foreign people. Especially there are a lot of Europeans, Americans. I meet a lot of different nationalities. I’ve met people from Afghanistan, Madagascar, Iran.  It’s great. 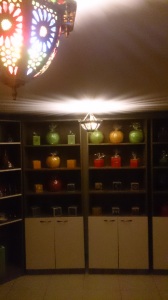 How did you end up in Istanbul?

I originally came to work for a company. Also, I have a company selling candles for a hotel (that’s why it’s called Marakes Mum). It didn’t work, so the ‘last stop’ is this restaurant.

I love Kadikoy, there is a lot of foreign people. Its’ so quiet. I’m living in Kadikoy also. Normally, when people is coming from the other side, you know that people aren’t coming for just eating. They are coming for something special. In Taksim or Fatih, people just pass and say,  ‘there is a restaurant, I will eat’. But here you know that people are coming here to eat Moroccan food. And they like it, and they come a lot of times.

So you have a lot of repeat customers?

Beef tangine is the most popular. People ask me ‘Why your meat is different than Turkish meat?’, I tell them it’s the same meat!  We just cook it in a different way. But 100 percent of spices from morocco. We import these things.

Are you thinking of opening another branch?

I am thinking about being bigger, getting another place.

What’s the difference between Turkish and Moroccan food?

Turkish food is also good. The problem is there are some dishes without spices. They don’t use more than three spices in the dishes, biber, salt, etc. The dishes aren’t tasty sometimes. That’s why they put a lot of hot peppers (jalapenos) to make it more spicy, but you don’t feel the taste.

Yeah, here you can really taste the food. The spices complimented it really well.

Thank you so much.

The Bottom Line: This is one of the best ethnic eating experiences I’ve had in Istanbul. I will definitely go back.

Location  & Hours: Caferağa Mah., Şair Latifi Sk. 12 (just down from the Moda Meydanı (havuz). Opens everyday at 4 p.m. or so. Look up “Marakes Mum” on Facebook.